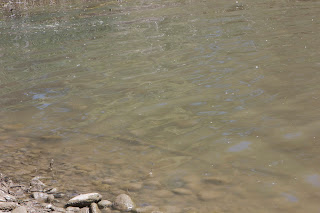 Wow what a great day Carp fishing.  The morning started out kinda of rough as I was pounding the water with Backstabbers with a bit to much weight.  Each time I plopped the fly in front of and across each Carp, I would make a big splash and spook the fish.  I guess I need to use the barbells instead of lead eyes when stalking Carp from the shore.    At one time, I actually managed to place a Black Back right in front of 'tailing' fish and watch him inhale the bug only to have yanked out of his mouth as I quickly pulled the fly out of his mouth.  I was just amazed he sucked in the fly that I also froze... and watched him spit the fly out!   Damn!
I remembered to bring a few Cottonwood 'Dry' flies with me. After changing flies I ran into a pod of Carp wallowing in the shallows.  I think I was more surprised that the Carp took the dry fly than the Carp who actually sucked the bug in.   Great fight though. 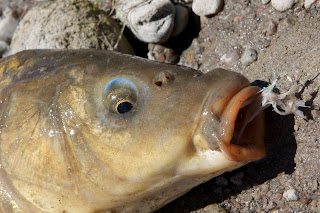 After landing this guy I moved around the ponds a bit more and found a vantage point high and in the shade.  Perfect ambush tactics.  Just like being on point while in the Army.  Out of site and 'masked' by the trees. 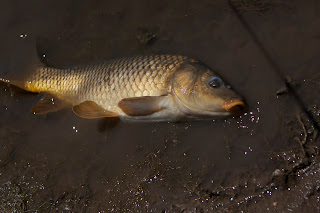 I watched this guy pushing up silt and bugs.  Casting well past him and in front, I slowly stripped the Cottonwood Dry fly into his cone of vision, hoping to compete with the small tornado of silt he was stirring up.  His tail stopped, my line tugged and the fight was on.   Such fun.

I read in a past FlyFisherman Magazine article about Carp fly fishing that often Largemouth Bass will Carp as they stir up the ponds silty bottom looking for bugs and grubs oh my.  Sure enough, while stipping in from a botched cast I pulled out a Largemouth Bass that I had no idea was in the neighborhood. 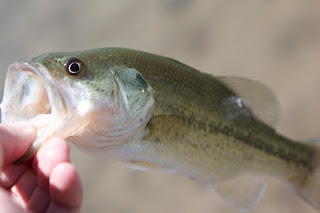 Just a cool purple flower with a bug flying beside it. 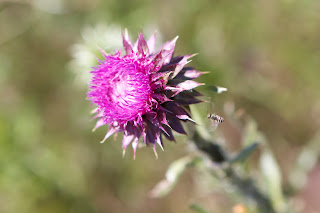 Overall a great day out at Arapahoe Ponds in Fort Collins.  Bring on the Summer!
Posted by Lonny at 3:50 PM