I had a few minutes after work before I had to be home so I drove down to my favorite carp pond to see how the pond looked after the recent warm weather.  As I drove the first thing I noticed were the trees!  Where were the trees? It seems the City had come in and removed all the Russian Olive trees thus opening up the entire shore and bank.  Wow this was going to be a new challenge this year. Where am I going to hide?
Getting over my shock, I strung up my fly rod and walked down to my favorite area. Hiding my shadow in the later afternoon sun in the few remaining trees I saw Carp! Many, many Carp!
Getting my shock and excitement I sat and studied the scene before me.  I remember reading and article by Dave Whitlock in the September 2008 issue of Fly Fisherman, where he listed the common behaviors of carp and your chances of catching a carp based on that behavior.
Ok what was I seeing here?  Jumpers, two of them, poor chance of catching them!
Basking or daisy chaining groups- another poor chance!  Moving around a bit I tried to cast to a few that I felt were tailers, excellent!  No dice.  Was I that rusty?  Did I really loose all my skills? Was my bug to big?  Was it that solar flair mentioned in the morning news? 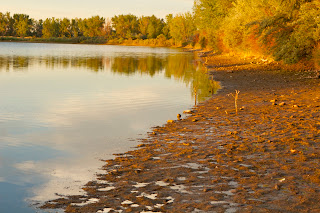 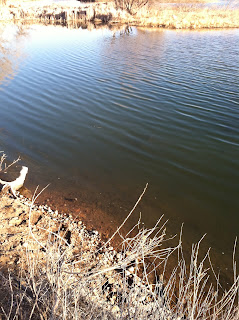 Sitting back and letting the carp settle back down after my shotgun blast of a cast into the middle of a group of baskers I just sat and watched and reflected.  This was the beginning of a new season, a new adventure.  I am armed with new flies from that cool Carp Fly Swap.  My favorite pond has a new haircut and I am fresh from the sleep on winter.  I am excited, I am refreshed, and I am ready for the new year of Carp on the Fly!!!!
Posted by Lonny at 8:38 PM