It started out so promising...but!

The day started out so wonderful.  I slept in a bit, took the dog for a walk and the weather was just fantastic.  Over 80 degrees and partly cloudy.  I walked my favorite pond and landed some nice carp.  Even witnessed a new behavior for carp that I had never seen.

I found 3 pods of carp actively pushing mud and brush.  There would be about 4 to 7 fish along with a largemouth bass or two on the outside of the mudding. These guys were really pushing mud and making a fool of themselves.  It was very impressive.  I wonder what was so darn good down there?  It had to be some really good type of food source for them to be so aggressive and carefree about their behavior.

I found it easy to just cast past the mud ball and slowly stip my Minnow colored Zimmerman Backstabber that Erin suggested the other day.  Love love that color pattern by the way Erin, thank you.

I moved to my favorite flats to see what was going on.  Carp everywhere and mudding and shouldering.   I did manage this nice guy right off the bat. 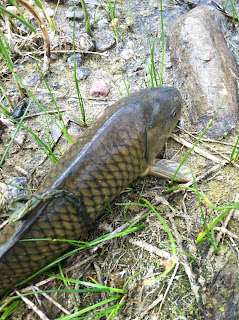 I rounded the corner to rest the flats for a bit  and I hooked into a MONSTER!!!  It was a big brown sugar colored monster of a shadow and after two tugs on my fly rod...snap!  The biggest carp I have ever hooked up with and my CPX Redington 8wt snaps at the second section.  Crap! I lost the fish and broke my favorite fly rod at the same time. 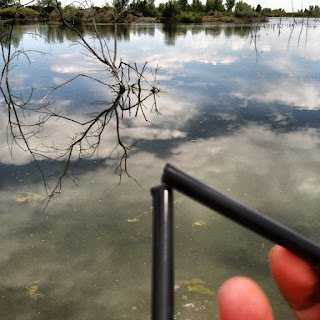 Well I called Redington and received instructions on how to send the rod in for get a new rod.  In my mind I have a horror story of this taking months to replace and I would be out my favorite rod for my trip to Beaver Island with Kevin, but the nice lady on phone said it really only takes about 5 days once the rod is at the shop.  I ran home, filled out the form and mailed the rod.  The only thing I have a beef with Redington is the 30 dollar shipping and handling fee, but thats not horrible I guess in the long run.

I will report how the rest of the experience goes with returning a rod to a manufacturer.  My question to you out there in the blog-o-sphere, have you ever experienced a broken rod and had to return one for replacement?  I would love to hear your thoughts and experiences.

I promised myself I would not second guess my actions that caused the rod to broke.  It broke and I was the guy at the other end and I accept that.  No excuses.