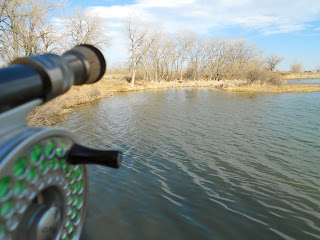 Wow what a great day stalking carp at my favorite carp pond in Fort Collins.  With the local warm front passing through the Front Range of Colorado our local ponds are warming up fast.  Around noon when I started the temp was right around 55 degree's. Light breeze and the was clear to about 3 feet off the shore, otherwise it was silty. I positioned myself next to that big cottonwood tree on the left and did my best 'tree' impression.  Short after I was amazed to watch a 'flight' of 3 medium size carp fly towards the reeds, each one off the right shoulder of the one in front.  I was really thought I was watching a flight of P-51 fighters sent into patrol the flats for the bigger bombers in the rear. 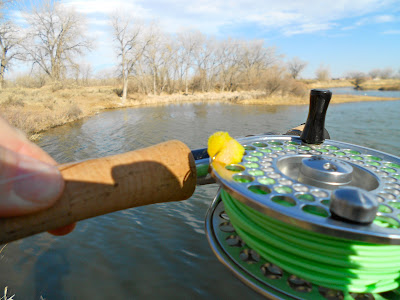 I tied on a huge orange crawdad pattern from the fly swap and after two cast lost it in the tree!  Damn.  Wondering if this was just to big I went for something I have never tried before, an egg from Gregg Martin. Gregg states "Eggs are nice in that they land softly and present a very visible piece of possible food. Carp often go far out their way to investigate them on the bottom or even suspended in the water column. I normally fish these to either poorly seen or unseen fish under an indicator. I do not think they are taken for an egg, as I catch most fish where they never see such a thing."  I am a solid believer in Eggs now!  I watched this guy suspend in the current.  I cast past him and pulled the egg over him slowly and then when the fly was just past his nose I let the egg settle and was rewarded.  I watched the carp swim forward and suck in the fly!  How cool was that?  Thanks  Gregg, you made a convert of me. 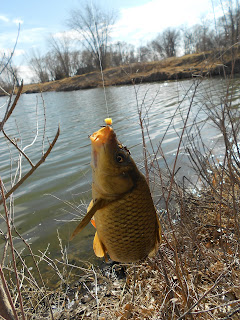 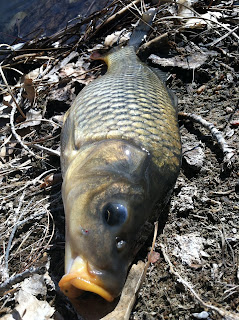 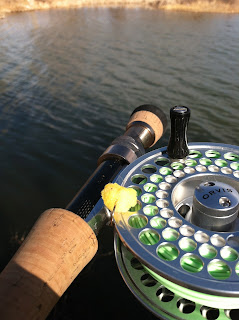 Well by the end of the day the water temp had climbed to 58 and more carp were coming up closer and closer to the shore, but alas I had to run off for dinner. I did land two and lost 2 more. I can't wait for this weekend as the weather is supposed to continue to warm.  Hope to post more pictures soon.