This was my first experience attending the opening day of Spinney Mountain State Park in South Park Colorado.  Shoot I grew up in Buena Vista where the trip to Spinney would have been a quick 1 hour drive, but NO!!!, I had to start fishing the area when I live 5 hours away! Talk about doing things the hard way. 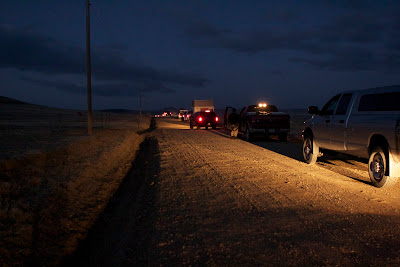 When Mike and I arrived we were expecting huge crowds and long lines at the park entrance.  What a pleasant surprise to only wait about 5 minutes before the gate opened and we were let in. I have heard stories about long lines and crowded fishing conditions, but with the opening being on a Monday and the weather forecast of cold and snow, the lines were short. 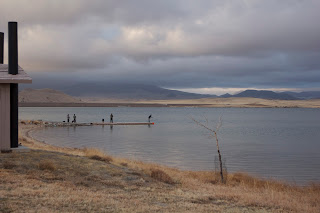 Most of the crowd seemed to focus on the dock and along the damn.  We had some success here but nothing really big.  We moved after about 2 hours here.   The weather held for a bit, just windy and cold.  South Park is known for one thing, Wind!  So far none of that. 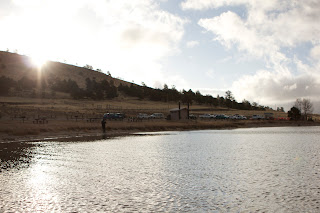 We moved after some lunch to the damn side.  Wow, wind, snow, and lots of getting sand blasted.  But the move was the best thing we could have done. 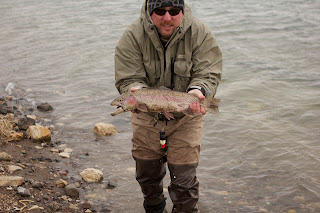 Up to this point this was the largest rainbow I have ever caught and landed.  He took a Barr's Slumpbuster in Black.  The fish were concentrated about 10 to 20 feet off the shore.  This guy missed the fly the first cast.  I was able to quickly cast back to his area and bam!  He slammed the fly.  Love that Slumpbuster. 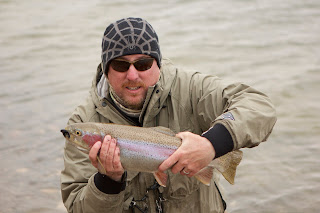 Another bow on the Slumpbuster.   I lost this fly after making a huge rookie mistake.  For some reason I had it in my mind that these fish would be leader shy so I had on 5x tippet.  I was lucky to land the fish that  are shown here, but the next fish was big, really big.  He busted off the fly and took the tippet with him.  Damn!  After talking with a few other fly guys, I learned they all had on 3x.  Duh!  What a silly error.  Oh well, live and learn.

So some lessons for next year.  Bigger tippet, 3x at least, and tie up a huge number of black Barr's Slumpbusters.  And dress for the worst.  Its cold and windy out there in the Park! 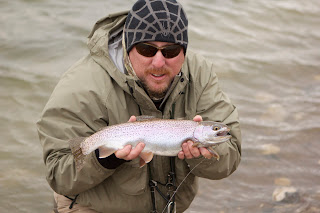 I did switch to a large October Splender streamer and they also liked that. 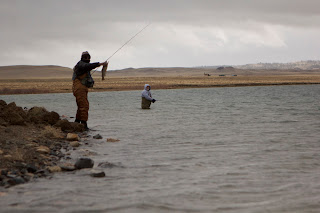 This guy was so cool. He borrowed all his gear from the guy in the background.  He caught fish after fish with a black wollybugger while his buddy never even had a hit.  When we finally left for the day the guy in the sweatshirt finally landed a nice size rainbow!  Way to go. 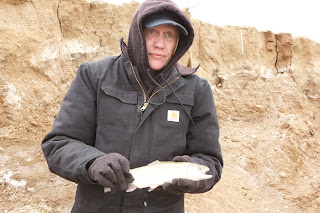 Spin fishers were having luck with gold Castmasters and black Panther Martins. 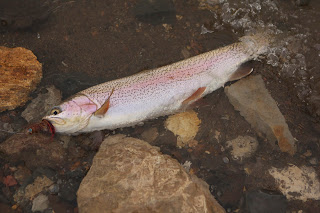 He took the October Splender.

Mike and I hope to make this a yearly adventure.  If you can, get out to Spinney Mountain State Park and catch some hogs!!!